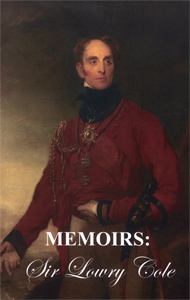 «General Galbraith Lowry Cole was commissioned a cornet in 1787, and served in the West Indies, Ireland, and Egypt. He served as brigadier general in Sicily and commanded the 1st Brigade at the Battle of Maida on the 4 July 1806. In 1808 he was promoted to major-general, to lieutenant-general in 1813 and full general in 1830. He was colonel of the 27th Foot, commanded the 4th Division in the Peninsular War under Wellington, and was wounded at the Battle of Albuera in which he played a decisive part. For having served with distinction in the battles of Maida, Albuhera, Salamanca, Vittoria, Pyrenees, Nivelle, Orthez and Toulouse, he received the Army Gold Cross with four clasps» (from the editor’s advert).

This site uses Akismet to reduce spam. Learn how your comment data is processed.

Books, Bibliomania, Ex Libris and the art of engraving.